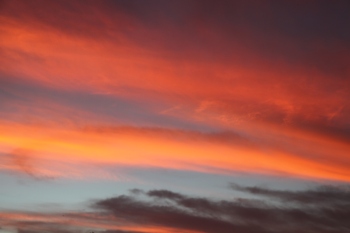 This photo was taken at 8:30 pm in Northern CA.   It didn’t feel like CA, though, it felt like Solaris.   One look at the sky and I was cast onto another world, that looked exactly as I had imagined long ago:  sad, eerie, mysterious, sentient.  A fictional remote world almost entirely covered by an ocean that is studied by scientists captivated by strange phenomenon it displays; They perform experiments on the ocean, and are later to find that the ocean is reciprocating by performing psychological experiments on them.  Each one of the individual humans on the research station hovering the planet is confronted by his or her own private nightmare, including the main character, a psychologist who is haunted by guilt over his wife’s suicide, and now faces her impossibly real, living, breathing manifestation.

The book, Solaris, published in 1961, was written by a Polish SF and philosophy writer, Stanisław Lem.  I found a much-later translation in a local library and was fascinated by the idea.  I read it expecting resolution, solutions, answers;  A far away action-packed adventure with a happy end.  Such was most science fiction by western writers of that era. But Lem considered western writers too shallow.  Instead the book focused on the question, and thus in effect provided the author’s opinion:  total failure.  Humans are completely inadequate in their futile attempt to understand the truly alien, and will never succeed in it.  We come across as narrow-minded, aggressive, paranoid, limited.  We don’t understand intelligence if it is too foreign, and we never will.

The book was made into a film three times, and I had been ignorant of the first two, but the last one greatly surprised me.  I simply didn’t think it was Hollywood material (2002, produced by James Cameron).  I was greatly surprised that George Clooney was cast as the main character, because it was the first time I saw him play a serious, troubled character, but he in-fact was very compelling.  The movie changed the focus of the story from the alien world, to the relationship of Clooney’s character with his dead wife, and thus became more of a psychological drama, where the futuristic nature of it is of lesser importance.  The movie is also slightly more optimistic as to how the story ends.  It is still very sad, thought provoking, painful.

Lem was very interested in the philosophical implications of future technologies and wrote about it.  In 2005, (just the year before he died) Lem “expressed his disappointment with the genre of science fiction and his general pessimism regarding technical progress. He viewed the human body as unsuitable for space travel, held that information technology drowns people in a glut of low-quality information, and considered truly intelligent robots as both undesirable and impossible to construct.” (quoted by wikipedia from a German publication).

I actually agree with him to some extent about the very last part, and I will write about that in a future post, but I do hope that he was wrong about everything else.

Science/tech/space and sci-fi connections; the human experience in the 4th age.
View all posts by Kidmat Eden →
This entry was posted in Sci Fi and tagged science fiction books, science fiction movies. Bookmark the permalink.