I Dream Of 3-D Printing

These famous words identify Captain Jean-Luc Picard of the fictional star-ship Enterprise. As he speaks these words to a ‘replicator’ installed on a wall in his room, a steaming-hot glass cup of tea appears to his satisfaction. These words have inspired generations to dream of such replicators: future machines that given specific instructions, can produce anything you want.

The idea is not new. Hadn’t humans wished for such magic since the dawn of their existence? It is almost the very definition of magic. Magicians make stuff appear out of thin air, or magically turn one item into another. Alchemists were asked to turn cheap substances into gold; today we know it is possible, but the amount of energy investment required makes such activity futile.

Still, the idea of making anything is so alluring.

I’m not sure what Stephen Baxter knew about 3-D printing when he wrote The Time Ships, published almost 10 years ago, as a sequel to The Time Machine by H. G. Wells. This most unusual story set 650,000 years in an altered future (then 50 million years in a different past) describes the continued adventures of the Time Traveller. In this future humans seem to be physically ugly, ape looking creatures, but vastly advanced. They have constructed a Dyson sphere, where they live, around the inner solar system, and they trap the Sun’s energy within it. They no longer live on Earth that has thus gone dark.

These future humans, the Morlocks, have a mechanism embedded within the sphere, that can generate anything they need. Living quarters for the Time Traveller are erected and destroyed like play-dough is used in an animated movie. He is provided food and water automatically by the same mysterious mechanism, underneath his footing, from the same gray matter from which everything else seems to be built. Will we ever reach such efficiency?

Making things is all about manipulating matter, changing its form using chemical or physical processes; electron recycling… Sometimes it’s a lot of work. Many things are no longer made by hand – they are made in factories by machines, but these are dedicated to their purpose; they can’t make anything, they can only make that which they were designed to make. What does it take to create a machine that can make anything?

Just like it’s possible for a computer to recreate a picture by taking a digital snapshot of it – basically recording pixel by pixel what is the color of the pixel – then printing it out pixel by pixel, similarly it can recreate an object by taking a digital snapshot of it in 3-D: pixel by pixel, for each layer, layer by layer, then printing it out pixel by pixel, layer by layer. The first printer would use ink and print on paper; the second printer would use a special compound that when heated sticks (thermoplastic or metal wire), so that the material in each layer would be combined with the material in the layers above and below. This process is also referred to as ‘additive manufacturing’ or ‘fused deposition modeling’.

In just a little over 30 years, this idea has gone from an abstract that most couldn’t envision its use, to a technology that is disrupting every aspect of how things are made. it’s about making things that are complex to make by molding or in any other way, and doing it in a way that’s faster and cheaper. The first machines were expensive, but the ‘makers’ movement, hacker communities, ‘Do It Yourself’ hobbyists have pushed the market towards domestic use, by making available affordable smaller printers, and open source market for the 3-D models of things to print.

Now the list of uses is endless. With 3-D printers big and small you can now create anything, from automobile and spacecraft engines to jewelry and medicine.

You can make clothes: 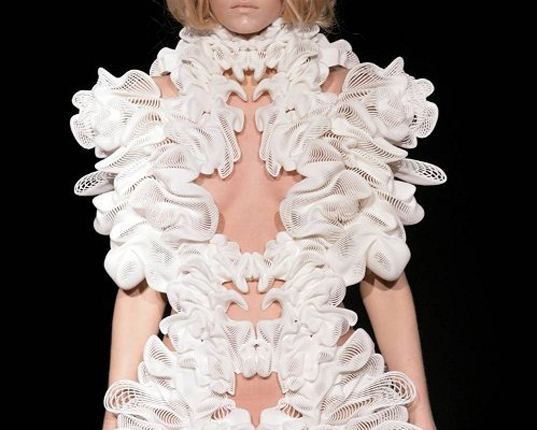 You can make legs:

A week ago, on September 23, 2014, space enthusiasts cheered on as Space Exploration Technologies (SpaceX) delivered a 3-D printer to ISS (the International Space Station). This will allow the ISS astronauts to replicate parts needed on site.

A 3-D printer on board ISS: Now things can be ‘Made in Space’
Source: techtimes.com

The future of the Morlocks seems somewhat depressing, I do hope we don’t end up quite like them. Maybe it’s all about the color.  Cheerful little polymer creatures printed for me by a MakerBot printer in the last Maker Fair I attended, remind me that maybe the secret is to NOT go gray. 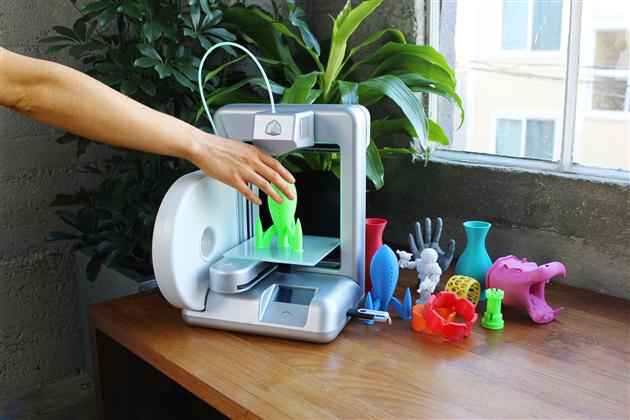